So much have happened since last time I wrote here.

So, I guess that I have been kinda occupied. I haven't updated this blog since 28th of june…

Oh my ZSH with git-prompt.

I just got an updated Macbook Pro at work, the 2019 model (my previous one was a 2016 model). With it, comes the ZSH shell as a new default, instead of bash. I have been a user of bash and bash-it for a decade now, and it is fun to try something new.

I can't say I notice much difference (yet), but there was something I missed from bash-it: The possibility to see detailed information about the current git branch in the prompt. Oh My ZSH only shows the current branch-name + wether it is uncomitted changes or not. To see detailed information (how much behind or in front of remote branch my branch is, for instance) I had to use the git-prompt plugin. But that came with a drawback, namely that I get the git branch info twice!

git-prompt is using the RPROMT (right prompt) to show this information, (i.e. it is placed right in the prompt), and it wont remove the git information in the ordinary prompt. To make up for this, I just made my own custom theme instead, a simple wone without any git information:

I've made yet another composition!

I'm now trying to sell my apartment, to buy a larger one. So I can move in with my girlfriend <3

I've made a new composition!

Today I found an excellent article on mixing drums. I was so afraid I would loose sight of this until I needed it, so I started a new page where I intend to list the best articles I find on different aspects of music production.

I have contributed to a Hip Hop album, here is the finale of the album, Ten Years an orcehstral track made by me.

I made a rendition of myself as Odin. I used the app called Portrait AI to turn myself into a portrait. That app adds an ugly watermark bottom right, so I continued with this web page to remove it. Since the page did such a good job removing the watermark, I removed one of my eyes as well. And thus, I turned into Odin. 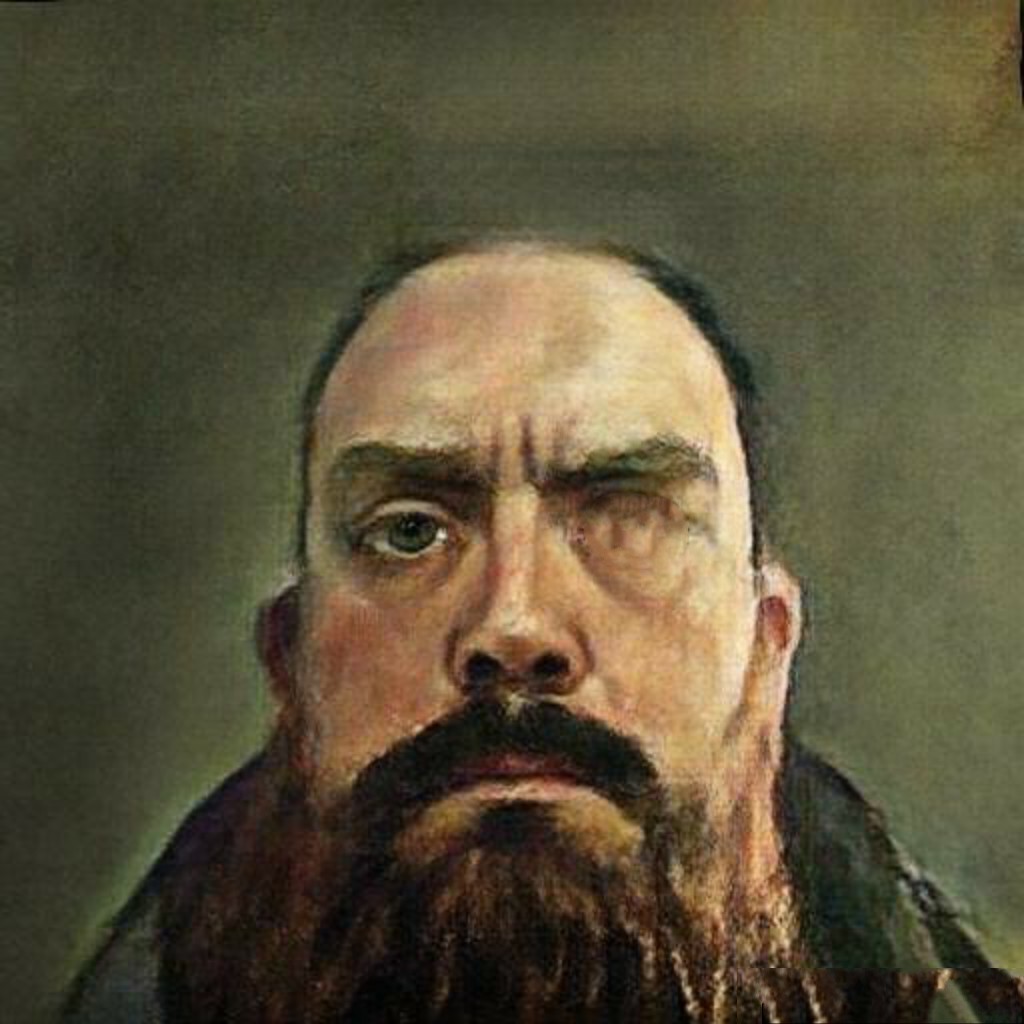 I have a new synthwave track.

I recently made a survival horror game called DOSBURD, where you must avoid hitting walls of Hate mowing towards you in a blazingly fast speed. If you crash into them, you will die spectacularly! The game is compatible with handheld devices, such as android phones or the pip boy. The game is loosely inspired by a little known game involving a floppy bird, and also a strange emoticon who eerily resembles a bat.

Today I made a skating game called Ollie. It is heavily influenced by Tony Hawk Pro Skater, but I made it with ASCII characters, so you can play it in a terminal. It is also compatible with Pip-boy. I have monetized the game by bringing in optional hats that you can buy (this was solely my idea).

I have lived a very troubled and challenging life, and I have also come a far way. For some reasons, people with very limited brain capacity therefore thinks I have come a far way because of my challenges. No, I have come far despite them, and Satan only knows how far I would have come, if I grew up in a loving caring home, had a reliable family and network of friends, didn't loose my (abusing) parents at a young age, and wasn't bullied at school. Somehow, I think my life now would have been much better, and that I could have achieved even more.

I am currently working on two pokemon battle tracks, one orchestral and one chiptune. The orchestral is a cover of the red/blue wild battle theme. The chiptune one I have composed myself (perhaps Ill make an orchestral score of that as well).

Tonight I have experimented mastering the orchestral track. I use Izotope Ozone 9 using the Master Assistant feature. In addition to that, I have added two compressors and a limiter, and the sound got very beefy in the end. I have made a bounce of each track, so you can listen on the difference on my clyp.it page.

If you look at the dynamic range bars in soundcloud, you can clearly see the difference. But it really shines on how louder it SOUNDS! It really is an amazing difference. 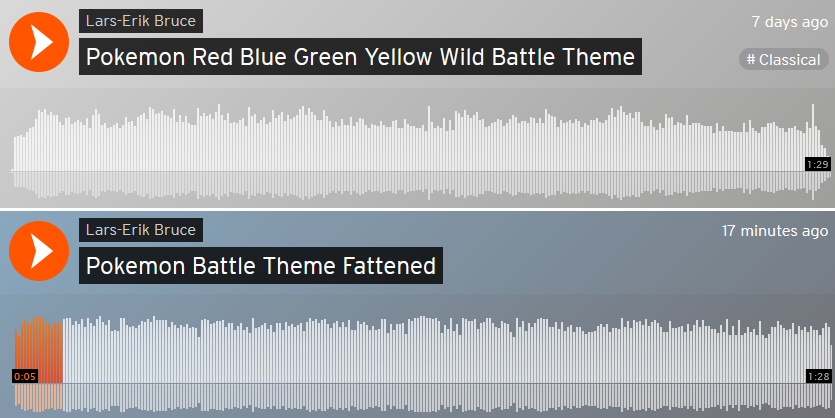 Recently I released an orchestral version of the Pokemon Red/blue wild battle theme. I spent quite some hours arranging it, based on a MIDI file, and I must say that I am pretty proud of the result. It was arranged within Ableton Live, and I used Albion One for the main ensemble instruments and legacy Vienna Symphonic Library (from Kontakt library) to spice up with solo instruments (and timpali).

Yesterday, I postet my first Youtube vid ever! Its of a ice race track I made with my brother, the vid featuring me, my brother and a common friend of ours racing.

I am playing minecraft with my brother and a common friend we have. I have started two huge projects: One dwarf village under ground, and one castle above groun. Today I made some screenshots of the tavern in the castle avilable in my shiny new page "Lebbes Minecraft Vault".

Today is my birthday, and I did two productive things at once. For the first part, I created a new POC of a synthwave song with a 3/4 whatucallit. You can listen to it here (until I take it down). I also created connectors for rekt.network and nightride.fm for the Web Scrobbler project, but they want me to send one PR per connector, so must do more work with it tomorrow.

Today I have made progress with my castle, and completed all small lesser towers by the main entrance. 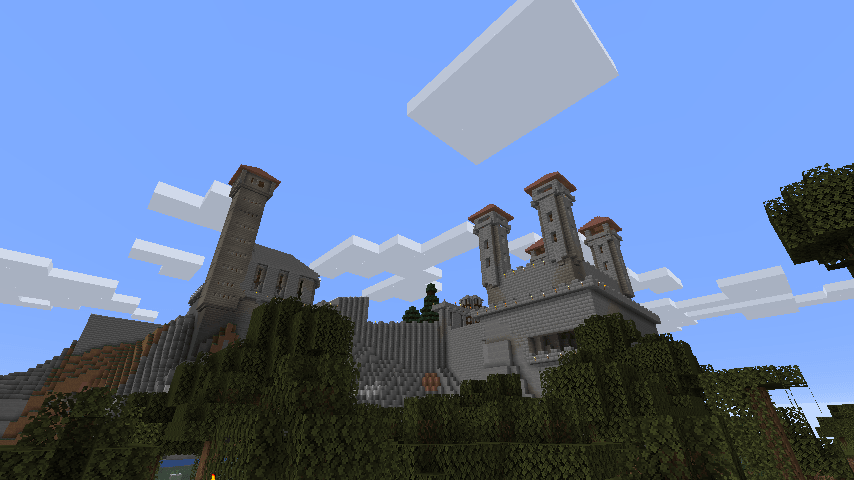 After going a long walk in the woods, I come home and discovered a wonderful site / web-app called BeepBox. It got a super intuitive piano roll (I understood it at once without reading any documentation). The app uses the URL to "save" the song, and all of it works on the client side. One of my pet projects use same scheme for "saving" (not an app to create music), but not as sophisticated as this.

I did of course compose my own little synt-track on the BeepBop. Feel free to check it out!

I did some more layout work on this terminal program. The style commmandments applied is written in such a manner that it should be applicable to all standard documents that adhere to the HTML5 standard, without setting additional class attributes or anything else. Feel free to copy it, alter it and use it as you plase.

Monitor lines and other ideas was stolen from this CSS Tricks post.

Today I made a game based on the very first computer game I ever played. That was on a Rainbow 100 machine (floor model). My dad got it for free from the university* he was working in (as a janitor of some sorts).

Me and my brother also created our own "games" on that computer, using the text editor. We filled the screen with labyrinths we had to traverse with the cursor. It got really difficult when we had to scroll the screen with the same cursor at the same time.

* Not really a university, but a school for pupils of same age called Hochschule (Høgskole). It is basically the same but without the possibility to graduate doctorate students.

See which one of you and your friends responds the quickest by the sound of a sine wave. Result is measured in milliseconds. You can also compete with yourself!